To discuss your giving questions and preferences, or to get wire transfer instructions, contact Caroline Cotter, Interim Director of Development, at 212-607-3365 or ccotter@nyclu.org.

In November, the NYCLU welcomed Yusuf Abdul-Qadir as our inaugural Senior Strategist for Racial Justice. Former director of the Central New York chapter, Yusuf has since 2015 led police reform efforts in the region, co-led the NYCLU’s Privacy and Technology and Racial Justice Working Groups, and collaborated with advocates statewide on criminal legal reform.

Throughout 2020, Yusuf worked to educate and activate local Syracuse communities around police accountability issues and infrastructure decision-making, such as the debate over plans to deal with the crumbling Interstate 81 overpass that has segregated the city for 60 years. His fiery appearance at a police reform town hall with the mayor in July went viral, showcasing how people can use their voices to demand change from local leadership. A Bronx native and graduate of Syracuse University’s Maxwell School of Citizenship and Public Affairs, Yusuf is one of the leaders of the People’s Agenda for Policing. He has been a United Nations advisor, and as an adjunct faculty member at Syracuse University he teaches a graduate-level course on privacy, freedom of expression, and the implications of emerging technologies on racial and economic justice issues.

We spoke with Yusuf about the potential for reforms in New York to have a national impact and his plans for driving the NYCLU’s racial justice efforts in the coming years. (This interview has been edited for length and clarity.)

NYCLU: What does it mean for the NYCLU to now have a position devoted to racial justice strategy?

Yusuf Abdul-Qadir: Racial injustice isn’t new. It’s an ongoing recognition of the ways that our society has been organized and structured to facilitate disproportional outcomes for Black and Brown communities. With recognition of the deaths of Ahmaud Arbery and Breonna Taylor and George Floyd, there’s this reckoning that we have not fulfilled the mandate of a more perfect union, that in fact there’s a need for a third reconstruction.

So as an organization, this position shows our commitment to racial justice issues. It shows that if we don’t take a racial justice lens to all of our work we will continue to play Whac-A-Mole—we will solve a problem, but it’ll evolve and recreate itself in a new image in another space. We can’t talk about the criminal legal system without talking about racial justice. We can’t think about policing without talking about how the institution emerged out of slavery. We can’t talk about the issues in education equity or the ways that technology is used to surveil and monitor and target Black and Brown communities. All those exist because our country was designed and still manifests around white supremacy. And this position, as ambitious as it is, is to help the organization strategize ways to advance a racial justice agenda. I’m honored to be the inaugural person taking on this mandate.

How does your chapter’s work around I-81 in Syracuse fit with the NYCLU’s fight for civil liberties?

YAQ: It’s an important piece of work because it not only addresses the fact that communities in Syracuse are hyper-segregated and the highway is a facilitator for that, it also begins to tell the history of the ways that federal housing policy and urban renewal, and redlining previous to that, have developed the geography of segregation in Onondaga County, and in communities and counties across the state. That in fact Black wealth was destroyed.

Your appearance at the town hall in July got wide airplay. Among other things, it showed how impactful it can be to show up and speak up at local hearings. What is important for people to know about working in the local trenches on these issues?

YAQ: What most people don’t know is that meeting only existed because we called for it. We said we’re not going to have a private meeting with the Syracuse city administration, we’re going to have it in a public setting, in the common council chambers, and record it so everyone in the community can see and understand what happens in those rooms. We wanted to assert what democracy looks like. The 20 organizations that were involved in the effort and the power we built collectively was centered around acknowledging that we the people ought to be at the center of the solutions for the harms that are inflicted upon us. And we need to give language to what is not happening. Because when you leave it to the mayor, the mayor is going to present this idea that he is a reformer, he’s bringing these issues across the finish line. But the devil is in the data and the details, and it reflects something starkly different than what he proposes and espouses.

Do you believe that police reform in New York has the potential to ripple outward?

YAQ: In many respects, as goes New York so goes the rest of the country. New York was the purveyor of stop-and-frisk and broken windows policing, and it precipitated around the country as a kind of status quo. But it’s really important when we’re talking about sea-changing reform efforts that we don’t just center it on how issues affect communities in New York City but also communities in places like Syracuse or Rochester or Buffalo or Nassau County and Suffolk County. Rochester is one of the first cities in the country to remove police from schools. The organizers in Rochester pushed to create a Police Advisory Board, the only [civilian-controlled] police accountability board in the state. The Right to Know Act [a police transparency law that requires police officers to identify themselves, name the reason for a stop or encounter, and provide information on the complaint process at the end of encounters that do not result in an arrest or summons] is now in five different jurisdictions across the state.

The point I’m trying to make is that it’s important for us to learn lessons from New York City, but New York City is always going to be a kind of unicorn. But Syracuse is like other cities around the country, and Buffalo, and Rochester, and because the NYCLU has a large statewide infrastructure, other municipalities are leading the work in mid-size cities that is having precipitous implications around the state and around the country.

What issues and policies are your immediate focus in this new role?

YAQ: First, climate and environmental justice. That’s about making sure that we are not just defending people’s constitutional rights to protest the development of a pipeline through their community but also thinking about the ways that communities, especially Black and Brown communities, are harmed. You can’t express your constitutional rights if your access to basic essentials for living, like clean air and clean water, is harmed.

Another area is Indigenous justice. It’s disturbing that in our curricula and our civil rights discourse we erase Indigenous communities as if they’re not present and surviving. In New York state, we do not acknowledge and appreciate both the historical and the current contributions of our Native peoples. So as an organization whose job it is to defend the civil liberties and civil rights of everyone, how we think about tribal and sovereign nations is a new area we’re going to engage in.

What neatly dovetails with that is our conversation around economic justice, but especially around reparations, and the need to have truth and reconciliation about how we find ourselves where we are today. Educating the public on the way white supremacy has expressed itself socially, the way it’s baked into the law. New York’s engagement in the slave trade is so endemic to its role as the global financial capital we cannot extricate the way that white supremacy has impacted its powerhouse status. As a state, we have a responsibility to talk about that history as we think about how we repair that harm. 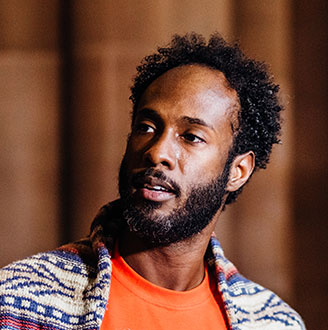