The NYCLU’s voting rights campaign calls for equal voting rights from the federal level down to the community level. In 2017, we brought suit on behalf of the Spring Valley Branch of the NAACP to challenge the way school board elections were held in East Ramapo Central School District—a system that had resulted in white residents controlling all nine seats on the board for more than a dozen years. In May 2020, a federal court ruled in our favor that the district’s at-large voting method violated Section 2 of the federal Voting Rights Act by disenfranchising Black and Latinx voters from having the chance to elect candidates who would represent their interests on the school board. In January 2021, the Second Circuit affirmed the ruling, clearing the way for a special election using a new ward system. The precedent-setting decision could improve opportunities and outcomes for students of color all across New York as it has become increasingly clear that diminished voter participation in school board elections has a direct impact on how student resources are allocated.

Spring Valley High School alum Olivia Castor, who was an NYCLU witness at the trial, testified to the gross discrepancies and failures engendered by budget cuts that stripped the public schools in East Ramapo—which are 96 percent students of color—of hundreds of teachers, counselors, social workers, and programs. Frustrated by the decline in student performance and graduation rates, Olivia engaged in dozens of direct actions—from protests to walkouts—while attending Spring Valley. A Harvard graduate, she is now finishing up her second year at Harvard Law School.

We spoke with Olivia about her experiences, the impact the ruling is likely to have, and how her activism has shifted since studying the law. (This interview has been edited for length and clarity.)

NYCLU: What types of things were you seeing and experiencing in the school as a result of such severe underfunding?

They cut a lot of teams and extracurriculars. They cut the girls soccer team at Spring Valley, so I had to play on the combined team. When I would get shuttled to Ramapo for practice, stall doors would be off the hinges in the girl’s bathroom. We didn’t have enough uniforms to go around, so we’d have old uniforms or have to swap out jerseys.

They cut one of the family planning classes, they cut home economics—stuff that people needed to learn basic skills for after you graduated. They also cut a lot of the AP and honors classes. They were cutting so many classes students would end up having three study halls or two lunches a day, a bunch of dead periods where we just weren’t doing anything.

Looking back, how did that impact you and your friends’ learning?

OC: We didn’t have enough textbooks to go around, so we were not given the tools we needed to learn the subject matter properly. And then when you’re talking about other schools in Rockland County or New York State, we just weren’t competing at the same level because we didn’t have the same wide range of courses, we didn’t have the same wide range of extracurriculars, sports and clubs. When I got to Harvard, I’d hear about all these classes other students had taken, all the other things they had gotten to do in their school. They were like, “Yeah, I met with my college prep guidance counselor.” That was not a thing that we had. We weren’t getting the attention that we needed.

It was tough. Professionally we’d be behind, in terms of access to colleges or whatever it is we planned for after graduation we’d be behind, and then just the rigor of the learning because a lot of the classes were under-sourced and understaffed. It’s those things that cause you to be so many steps behind your peers, and it’s because of the way our school district was underfunded.

What kinds of activism did you engage in during those years?

OC: My junior and senior years, we had tons of protests outside of the school board meetings. It got to the point where every school board meeting we’d have a rally. And we made regular trips up to Albany to meet with our elected officials and try to meet with the Commissioner of Education and other people who might have been able to help us out. And then we had petitions. The biggest one was the walkout, because that was coordinated with [the other district high school,] Ramapo. We asked all the students to wear black because it was a funeral service for our school district—we were no longer getting the quality education we deserve. We were basically saying, we may as well not even come to school because we’re not learning, we’re not given enough support, we’re not given resources, we have nothing.

What drove you to get involved at such a young age?

OC: My parents are Haitian immigrants, and they were always big on making sure your voice is respected. My parents were at all of the rallies, my dad left work to come to the walkout. They understood the importance of fighting for what you deserve. They always stood right behind me and encouraged me and my sisters to push for what we want.

Why was it important to you to support the NAACP/NYCLU lawsuit publicly as a witness?

OC: When I graduated from Spring Valley and got into Harvard, people, including school board members, would point to me and say, “Oh, look at Olivia, she’s exceptional, she made it all the way to Harvard.” I had a lot of support on the way, and I’m not any smarter than a lot of my classmates. There are tons of students from East Ramapo who if they had similar support and opportunities could have done better than I did. It’s about all of the other students who could have been in this place and should have been in this place if they had received the quality education they deserved. So that’s why it’s so important for me to continue to be involved, because the work isn’t done once one person goes out and accomplishes this really cool thing. There are a lot of other people you have to keep fighting for.

Is the ruling likely to change things in the district or in other parts of the state?

OC: It depends on how we’re thinking about change. When I was testifying at trial and when the ruling came out, there were so many people on my social media engaging with a legal opinion and looking into ward systems and thinking about how it was organized. There were so many students and young adults who were sharing the news and having robust conversations about what does building and harnessing local power mean, and how can it translate to actual substantive change. So on one level the change is happening.

The other part is realizing that although the legal system is very broken, there are ways it can work out and have the answers we need. Particularly this summer when we were looking at nationwide attention on the movement for Black lives, folks were on one hand saying, oh the system is broken, but on the other hand seeing that in some ways you can use it to accomplish incremental things. And that’s the kind of honest dialogue you need when you’re talking about these complicated issues.

How has your approach to activism shifted in recent years since studying the law? And what issues most interest you now?

OC: In high school I thought that our elected officials could change everything, and we just had to get them to listen. I’m realizing now that that is a very one-dimensional view of change-making. There are different power structures at play, and you might not be able to accomplish what you want just by pushing your elected officials because they might not have the power to do what you’re asking. So these past few years, participating in and studying other movements has helped me see that you need a multidimensional, multifaceted approach. You need to be attacking from multiple sides to get the change that you want.

One of the great frustrations I have with law school is this framing of the law as perfect—that the only issues that arise are when people are interpreting it—and failing to realize that the law itself can be very flawed. I’ve really enjoyed pushing my professors and classmates to see that what they’re talking about in the classroom isn’t how it plays out in real life, that there are very real flaws and limitations to the theoretical things that they’re talking about. But also making the law more accessible. A lot of people just do not know how the legal system works and what their rights are. You can talk about immigration, you can talk about criminal justice reform, you can talk about housing, but in all of those spaces it comes down to what do people know and how can we demystify these processes and systems. 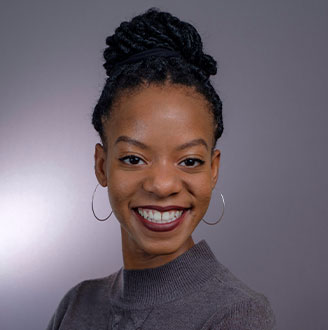